Jeep is American automobile brands of vehicle both sports and cross over and fully off-road worthy models like pickup trucks.

Jeep was originally started in the year 1940’s in Butler, Pennsylvania. It was set as one of the American brands started by Willy’s Overland. Willy’s Overland built the first jeep car in the ’40s and named it Willy’s MB Jeep. The Willy’s MB Jeep was a well-known car with no roof and doors. Jeep became the primary light 4- wheel-drive car and Willy’s produced over 300,000 jeep MB vehicles and the majority of them were used by the US Army military during the world war II. During that time around 30% of the jeep produced was shipped to the Allied Forces of Britain and Russia. After world war II, 1945-1949 Willy’s converted military jeep know as Willy’s MB jeep to CJ-2A where he improvised new features like large headlights, side-mounted spare tire, tailgate, and higher windshield. During that period other vehicle like the first station Wagon known as Willy’s Station wagon was innovated in 1946 and first jeep pickup was also introduced in 1947. In 1950-1951 Willy MB jeep evolved again to M-38 military model with new features like waterproof ignition system specifically to be used by the Korean War. Later on, Willy’s re-designed M-38 to M-38A1 with different features such as long wheelbases, more powerful engine and softer ride. In 1962 Willy’s produced M-170 which was used as an ambulance. From that time more improvement on jeep went on changing every time up to today’s latest jeep model.

Willy’s jeep CJ-2A Model
It was introduced between 1946 and 1949 by Willy’s after realized that they were going to win in the war with model MB jeep. It was similar to MB used during the war but had some changes like large headlights, seven-slat grille, relocation of fuel filler, tailgate, and relocation of the spare tire to the right side of the body. Other changes made were the utilization of gear drive instead of a chain drive for camshaft. It also came with driver seat and driver side mirror and other options like passenger seat, rear seat, center rear-view mirror and many more. During that time it was mostly used by farmers to serve in agriculture and industry all over the world.

Willy Jeep Trucks model
It was introduced in 1947 with two and four-wheel drive models to the modern farmers. It had a wheelbase of 118 inches. Later in 1951, the truck was redesigned with the addition of a V-shaped grille with horizontal bars and a four-cylinder engine replaced with a Flathead engine hence increased power.

Was introduced in 1946 by Willy’s-Overland motors. They described it as the people’s car since it could accommodate seven-passenger capacity. First, it was a two-wheel drive but later introduce four-wheel-drive station wagon.

It was launched in 1986 as a 1987 model to replace the CJ. It was more comfortable on the road especially in off-roads as compared with CJ. In 1997-2006 the second generation wrangler was introduced. In 2007-2017 the third generation wrangler was released. The new features were like power windows, remote power door locks, navigation and even the upgrade of the automatic gearbox. In 2018-present the fourth generation was introduced and is even available.

The first jeep renegade off-road car was introduced in public in 2014 at Gevena Motor show. It is one of the latest off-roader jeep cars. It is available with four-wheel drive and the choice of two 4*4 drive system.

The first generation was introduced in 1992 in Detroit Autoshow. It had new features which were not before like drivers side airbag and four-wheel antilock. It has the latest generation in the market well known as the best-in-class performance to top safety picks.
Other latest models available include Jeep Compass, Jeep Cherokee, and Jeep Wrangler unlimited. 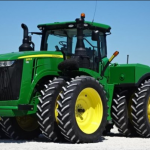 Next Story
Best vehicles for farmers